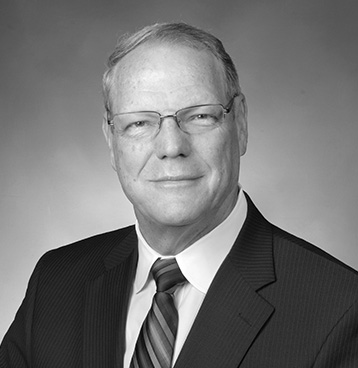 Robert Greving joined CNO Financial Group’s board of directors in May 2011. He serves as chair of the Audit and Enterprise Risk Committee and as a member of the Executive Committee and the Investment Committee.

Greving is the retired executive vice president, chief financial officer and chief actuary for Unum Group, having held those positions from 2005 to 2009. Greving also served as president of Unum International Ltd., Bermuda. Before becoming executive vice president and chief financial officer of Unum Group, he held senior vice president, finance, and chief actuary positions with Unum Group and with The Provident Companies, Inc., which merged with Unum Group. His duties prior to retirement included directing all aspects of the finance and actuarial responsibilities for the corporate and nine subsidiary insurance companies of Unum Group.

Greving holds a Bachelor of Science degree in mathematics from Quincy University.

He is a Fellow of the Society of Actuaries, and has served on various non-profit boards, including a current term with the CHI Memorial Health Care System, Memorial Hospital. Greving was named to the NACD Directorship 100 in July 2017, and earned the NACD’s CERT Certificate in Cybersecurity Oversight from Carnegie Mellon University in August 2017.